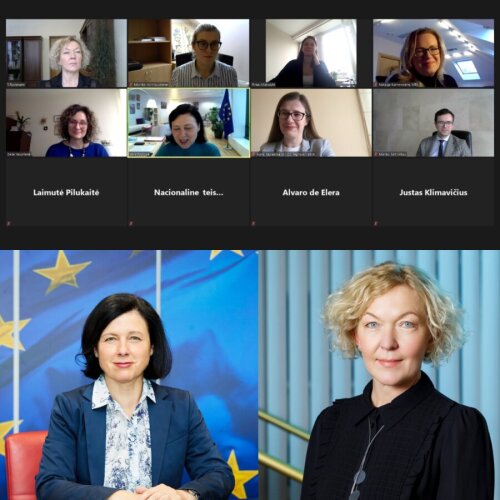 On January 25th a remote meeting was held where the Vice-President of the European Commission Vera Jourova along with representatives of the Lithuanian Judicial Council and the European Commission Representation in Lithuania sat down to discuss the January 13 case, the circumstances of its proceedings, and the situation of judges who had been investigating this case. During this meeting, Lithuania received official support from one of the most important EU institutions.

Sigita Rudėnaitė, Chairwoman of the Judicial Council of Lithuania who attended the meeting, thanked the European Commission for its concern about Russia's actions against the judges who heard the January 13 case. S.  Rudėnaitė emphasized that "the actions of the Russian authorities not only threaten the judges of the Vilnius Regional Court who handed down the verdict in the January 13 case; these actions attempt to impermissibly interfere with the ongoing administration of justice in this case.”

At the meeting, European Commission Vice-president Jourova noted that Lithuanian history is a lesson of heroism and determination, and the sacrifice of the freedom defenders is a reminder of how precious the fundamental values of the European Union are.

The meeting was also attended by Dalia Vasarienė, Member of the Judicial Council and Judge of the Supreme Court of Lithuania (SCL), Rima Ažubalytė, SCL Judge, Jolanta Malijauskienė, Chairwoman of the Vilnius Regional Administrative Court, and Marius Bartninkas, Chairman of the Civil Division of Kaunas Regional Court as well as Natalija Kaminskienė, Director of the National Courts Administration and officials of the European Commission Representation in Lithuania.