The courts have presented their operational results: the court reform accelerated case hearing in courts 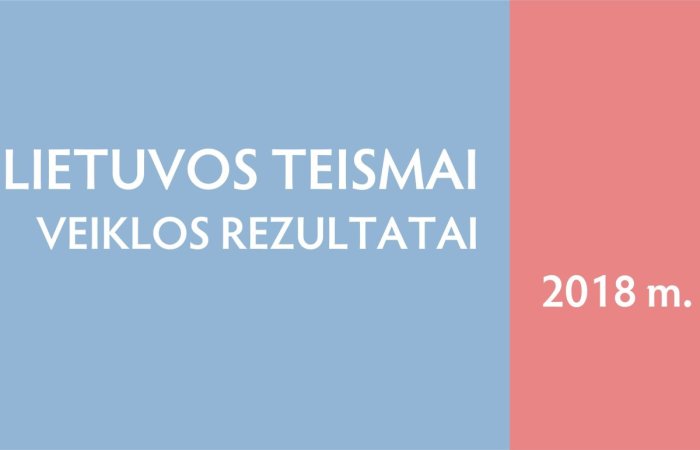 In 2018, Lithuanian courts received almost 225 thousand new cases and heard 830 cases per day. The number of received cases has decreased by 10% if compared with the previous year. The first results of the implemented reform observed in the previous year indicated that the decrease in the number of courts helped stabilise the workload and accelerate case hearing in courts.

“Two years ago, in order to improve accessibility of justice, we decided to cut down the number of courts by more than 50%. The reform showed significant results: it accelerated judicial proceedings, i.e. the workload of courts was equalised. For example, in Quarter I of 2017, the workload of Kaunas District Court was well above the average workload of district courts, and after the implementation of the judicial reform, the workload of this court stabilised and decreased by 14%.

The judicial reform launched the organisation of mobile court hearings thus making justice more dynamic and improving the results of client care in courts,” claimed Chairman of the Judicial Council Algimantas Valantinas, when presenting the statistics.

As in the previous year, civil cases constituted the major share of the cases heard in courts. Their number amounted to 175 thousand, and 37% of all heard civil cases were concerned with court orders. Compared to 2017, the number of civil cases decreased by 12%, and the hearing duration of a typical civil case lasted for three months.

The number of criminal cases last year amounted to almost 20%, and, if compared to 2017, it decreased by 2%. 23% of all criminal cases received in courts of first instance were cases of crimes and misdemeanours against traffic safety, out of which up to 21% took place through the fault of drink-drivers, whose blood tests showed the level of drunkenness above 1.5 promille.   A typical criminal case hearing in court lasts for 115 days.

The growth in the number of cases has stabilised during the last year. As in the previous year, people more often tend to settle disputes in a peaceful manner. Last year, over 200 peaceful agreements were reached through mediation. Judicial mediation is very popular in family, labour, business and inheritance disputes,” emphasised Mr. Valantinas.

The number of users of the portal e.teismas was also growing. Last year it amounted to 54 118 (39 500 in 2017). The number of remote court hearings organised last year doubled, and the on-line possibilities we are offering for residents to familiarise with information about the judicial system make us the third in Europe,” said Mr. Valantinas in his review of the field of court modernisation.

In 2018, almost 20 thousand natural persons and legal entities were convicted for crimes, i.e. almost 1 thousand more than in 2017. The most usual punishments were: fines, fixed-term imprisonment and restriction of freedom. “For a number of years, we have been leading in the European Union according to the number of imprisoned persons, and currently, we are the 5th in Europe. For a number of years courts have formed the following practice: having regard to the circumstances of a case, the court may impose a non-custodial sentence upon a person prosecuted for the first time for a minor or less serious crime, i.e. if possible, the purpose of the sentence is achieved by other means,” claimed the chairman.

Statistics have showed that courts manage to further maintain the quality of court decisions – only 1.71% of court decisions out of 227 thousand cases heard in courts were amended or repealed. A certain success was achieved with regard to protracted case hearings. The number of criminal cases discontinued due to the period of limitation decreased by 22%. Over the last three years, the number of criminal cases lasting for more than one year decreased more than twofold, and the number of administrative cases – by thirty times.

“Last year we preserved our position and remained one of the courts with the fastest civil case proceedings in Europe. At present, we are the second after Belgium. In 2018, the ECHR cases against the Republic of Lithuania did not establish any violation related to the overly long examination of cases,” claimed Mr. Valantinas.

In 2018, courts faced a serious challenge, i.e. law amendments, which provide for compulsory participation of a professional psychologist in the process of interrogation of victims and child witnesses. Where necessary, the number of psychologists was increased last year. At present, there are 13 psychologists working in courts, and the infrastructure of child interrogation rooms was renewed in all 12 district courts. Last year, a total of 1500 interrogations were performed with the participation of psychologists. 5 thousand court visitors received help from court volunteers in 2018. These social initiatives were recognised as the most progressive in Europe, and the courts received the award “Positive change” for the social initiatives aimed at creating a safer psychological environment for participants of court proceedings.

A great deal of attention last year was paid to open justice initiatives. In 2018, mass media representatives were allowed to shoot and record the procedure of court decision announcement. Decisions further remained the main message of the court. Throughout the year, judges were clarifying their decisions to the public by providing 850 comments to the mass media.  When celebrating the 100th anniversary of Lithuanian courts last year, 15 new initiatives involving thousands of students, seniors and other visitors were organised.

In his review of the goals of 2019, Algimantas Valantinas emphasised the last months’ events and measures, which were taken seeking to enhance the anti-corruption environment in courts: “The interinstitutional working group has already started its work. It assesses even minor risks of corruption. It has already had its first meeting, during which its members agreed on principles of work organisation and further activity directions. Issues related to the distribution of cases and formation of boards of judges were specified as priority issues. The Judicial Council, which took place on March 29, approved the description of the procedure of administration of the centralised internal channel of the judicial system, which will be used to provide information about possibly committed or being committed violations. This channel will be launched in the nearest future.

The report of the National Courts Administration (in lithuanian) is also available  here.

When quoting or by other means distributing this information, please specify the source of information.